The people are whispering about John. "Is he the one? Is this the Christ we've been looking for?"

John answers in very strong terms. He is not the one. In fact, the One will be so incomparably greater than John that John will not even be worthy to untie the strap of his sandal. John has only baptized with water but the One who is coming will baptize with the Holy Spirit and with fire. He will separate the wheat from the chaff and burn the chaff with unquenchable fire.

These are images of judgment but it is judgment for the purpose of refinement and purification, not mere destruction. John is proclaiming that the One who comes after him will purify Israel. He will be the refiner's fire spoken of in Malachi. He will purge Israel of its corruption. He will baptize, not merely with water, but with God's own Holy Spirit thus making real holiness possible.

Shortly after John's proclamation of the One, Jesus appears on the scene. After having been baptized by John, the heavens are opened, the Holy Spirit descends on Jesus, and a voice from heaven proclaims "You are my beloved Son; with you I am well pleased." The first phrase this voice speaks is supplied by Psalm 2:7. This Psalm spoke of the special relationship between God and God's anointed king; a relationship so unique in its closeness that God referred to the king as his son. Luke's point is fairly obvious. This is the One about whom John had been speaking. He is the Lord's anointed.

But if you read Luke 3:15-22, you'll notice that the story doesn't run quite as smoothly as I've presented it here. There is an interruption between John's proclamation and his baptism of Jesus. V. 18-20 tell us that Herod had locked up John in prison because John had reproved Herod for his relationship with Herodias, his brother's wife. Chronologically speaking, these verses do not belong here. That is, this imprisonment of John obviously comes later. Why does Luke interrupt his story about Jesus' baptism by John with this aside about John's later fate?

Luke is too polished a story teller for this to be an accident. This is not an "Oh, by the way, let me tell you what ends up happening to John while I'm thinking about it." Luke has placed this story about John's imprisonment here intentionally. It is a foreshadowing of what is to come. Luke intends for us to connect Jesus' baptism with John's imprisonment. Jesus is, indeed, the Lord's anointed but his path will be similar to John's. By being baptized by John, Jesus has essentially cast his lot with John. While John proclaims the very real difference between himself and Jesus, Jesus' baptism signifies what is the same. Like John, Jesus will be a prophetic voice at odds with the powers that be and his prophetic voice will earn him a fate similar to John's.

I believe we are doing something similar when we are baptized into Christ. Just as Jesus identifies with John in his baptism, I believe we are identifying with Jesus in our own baptism. We confess that this Jesus is the Lord's Christ, the one who is filled with the Holy Spirit, the one who can refine us and baptize us with the Holy Spirit. And in making that confession, we also confess that we know where this path leads; that this journey must go through the cross. There is no confessing Jesus as Lord without also confessing him as crucified. When we are baptized, we confess that we want to be identified with this Jesus, this crucified Messiah. We signify that we intend to join his movement toward the cross. 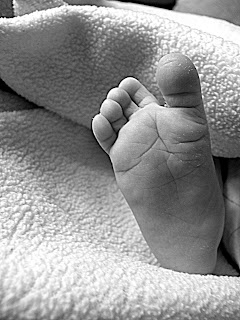 This Sunday, we will baptize our youngest daughter just as we have our other two children. The sheer cuteness of a child only a few months old, the mundane simplicity of plain water poured from a pitcher into a waiting basin, the day to day grind it takes to raise a child, and the weekly repetitions and routines of frail, human attempts at worship all threaten to drown out the gravity of that moment when a parent chooses to baptize a child. For in that moment, we will be committing her to the way of Jesus and his kingdom and, in so doing, we acknowledge that we are setting her feet - those weak and helpless feet of our precious baby girl, feet not yet able to support the weight of her own body - along a path that must eventually bear the weight of a cross. If that seems a painfully stark contrast, I mean for it to be. Far too often we forget - I forget - what it means to call ourselves both parents and disciples of Jesus. When we baptize Esther, we confess that she is on loan to us. That she is God's first and ours second. That we are only stewards. As such, it is not our task to make her happy or successful. It is to reveal to her the way of the crucified messiah by continually walking that path toward the cross ourselves.

Of course, there will be a day (and many after that initial one) when Esther will choose or reject this path for herself. Jess and I will not always be able to make this confession on her behalf as we do now. However, we baptize her now believing that long before we ever chose to walk this cross-shaped path, Christ walked it on our behalf. Before Christ called us to identify with his suffering, he identified with us in our suffering. The Son of God cast his lot with us human beings choosing to have his fate bound to ours, his divinity bound to our flesh. It is only possible for us to choose him because he first chose us. That is why Esther can be baptized into the Body of Christ before she is even old enough to be aware of her own body. God has already chosen her - just as he chose all of us - by his grace, apart from any of our own doing. We will baptize our daughter because it is among our deepest of hopes that Esther will walk in that grace for all of her days.
Posted by Unknown at 2:36 PM