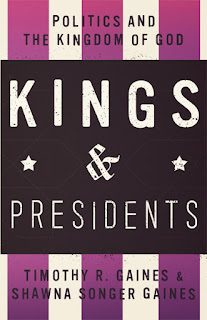 I once found myself in a Sunday School class where the teacher asked something like "If there is anything you could communicate to today's youth, what would it be?" Someone in the class jokingly said "Vote Republican!" Although the response was offered in jest, it seemed likely to me that it represented a very sincere sentiment. It was a sentiment that I had encountered many times throughout my life in the Church; namely, that one's Christianity could be validated or called into question depending upon one's political persuasions.

In Kings and Presidents, Timothy Gaines and Shawna Songer Gaines draw on the stories of 2 Kings in the Old Testament and their own pastoral experience to offer an alternative vision of politics and the Kingdom of God. At the heart of that vision is a sharp contrast between the World of Kings and the World of the Kingdom. These authors characterize the World of Kings as one where power, wealth, and influence are utilized to gain more power, wealth, and influence. It is a world with clear winners and losers where one seeks out winning at virtually any cost. The World of the Kingdom, on the other hand, is defined primarily by the faithfulness of God's people. It is not the world of the rich and powerful but of the ordinary and unknown quietly living into God's vision of reality and trusting God to bring about that reality through their faithfulness. In the World of the Kingdom, success has little to do with winning elections and much to do with imitating the savior who empties himself on behalf of others (see Phil. 2:5-11).

This is a message that the 21st century American church desperately needs to hear..... over and over and over again. Entirely too often, we have allowed the gospel to be co-opted by the two party system of our nation - imagining that somehow one party or the other has a corner on the market of what it means to be Christian. We are led to believe that Democrats and Republicans are polar opposites and that, as a result, everything hinges on who wins the next election. In this all or nothing contest, it  then becomes all too easy to regard the other side as our mortal enemy. Although Tim and Shawna spend very little ink discussing Democrats and Republicans specifically, their contrast between the World of Kings and the World of the Kingdom does a nice job of unmasking this charade that portrays our two largest parties as being so radically different. So long as they are both vying in the same arena for the same power, they both play by the same rules of power, wealth, and influence. For whatever real ideological differences exists between these parties, they go about accomplishing those ideologies in remarkably similar ways and thereby reveal that they are not so different after all.

But neither is this book a call to passivity or inaction. By no means are the authors advocating that all Christians abstain from the political process. Quite to the contrary, this book calls for Christians to be explicitly political. While voting for a certain candidate may be what comes to mind when we hear the word "politics," at its most basic level politics is about how people organize themselves. It is about the ways that their relationships are structured with one another, how they distribute power among themselves. In turn that structuring of relationships and power distribution says something about the beliefs and character of that group of people. A large part of this book's challenge is for the Church to be a people whose relationships - whose politic - reflect the character of the God they claim to serve. After all, the Church has always said that it is the love of this God that will ultimately transform the world - not the next election. The manner in which we engage the politics of our world may be one of the most telling measures of just to what extent we really trust that claim.

Posted by Unknown at 8:00 PM No comments: