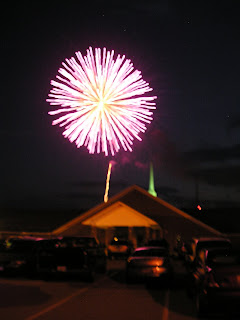 Last night, we enjoyed the town fireworks which are set off in the field right across the highway from the church in celebration of the 4th of July. Perhaps more than the fireworks themselves , we enjoyed watching Hannah's reaction to her first experience with fireworks. We wondered if the loud noises would scare her but she did very well. She was thoroughly mezmorized by the bright lights... for about five minutes. However, she eventually became so unimpressed that she even let out a yawn at one point. The grand finale seemed to recapture her attention for its brief duration shortly after which we fought through the most traffic you'll ever seen in Clinton and made our way home.

Of course, watching fireworks to celebrate our nation's independence from the lawn of our church leads a theological type like myself to ponder the ever difficult and challenging relationship of church and state. The relationship is often discussed ad naseum by the cable news networks in the middle of an election year like we find ourselves in currently. However, these discussions are almost exclusively given from the perspective of the state side of the equation. In other words, Americans ask again and again how much religion should be allowed in the public square. How much should faith be allowed to guide policy in a democracy where the majority of citizens are Christian (at least in title, although even this title means very different things to different people who give themselves this title) but there are other significant minorities whose rights must be defended under the Constitution? 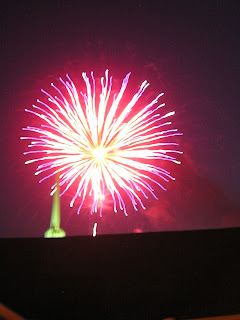 In contrast to this, it seems that more Christians should be considering the other side of this question. How much of the state should be allowed in the Church? This is a difficult question for us since the United States has been influenced by Christianity more than any other religion throughout it existence. As a result, the United States has generally served Christianity well, carving out the political space for a freedom of worship without threat of political interference. Certainly, that is something worth celebrating and for which we should be thankful. American democracy is truly a thing to be valued and admired.
However, as I will talk about to some extent in my sermon this Sunday, often some of God's greatest gifts carry the most potential for idolatry. This is the case precisely because they are such good things and therefore, we are tempted to regard them as greater than they really are, greater even than the God who gave them to us. Rarely, if ever, are people drawn to things that are just entirely bad or purely destructive. We are drawn to things because of their good qualities and they then become destructive because we give them an inordinate amount of space and importance in our lives. 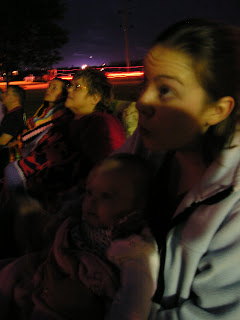 The same is true of our patriotism. Certainly, there is nothing wrong with valuing the great political progress represented by our government. However, we must not make the mistake of imagining that our government is perfect or that anything and everything the United States does is "Christian" just because the majority of its citizens go by that name. The United States is not and will never be the kingdom of God. We, as Christians, must seriously reconsider the amount of allegiance we are willing to pledge to our nation and we must be certain that this level of allegiance is always subservient to our allegiance to Christ and his kingdom. The United States of America engages in and encourages all kinds of practices that are by no means Christian and it is part of our duty as the Church to continually bear witness to the ways our world fails to conform to God's kingdom. We must be certain that we are Christian long before we are American.
Posted by Unknown at 7:26 PM

I have to say, these questions bother me a few times a year on the days when my congregation expects more than the slight tip of the hat that I give to these national days. I try not to make it a sword to fall on. I have managed to remove the flag from our sanctuary without problem but I have to give a tip of the had on the three national days. Which for me means we sing at least one song. Yesterday, we began service with America the Beautiful, which contains words that I think are good and proper for church people to sing about their country (whatever country they live in). "God shed his grace on thee" "God mend thine every flaw" "May God thy gold refine, till all success be nobleness" (I take this to be figurative "gold" and not real "gold") "Crown thy good with brotherhood" and "Confirm they soul in self-control"
They also sung "Mine Eyes have seen the Glory" which passed for patriotic, although I don't know why. On the other two obligatory Sundays we sing Mine Eyes have seen the glory. We do have those that have served stand and give them that appreciation.
All that said. I really wish we could divorce the state stuff from our sanctuary altogether. I guess I really don't understand why the state is so tied up in American Christianity. It seems so very odd.
On Saturday, my husband and I passed a larger church up in Wichita, that had no less than 50 American flags in front. We were amazed! What were they trying to say? What does it say about God? The congregation? Us as Christians when we make a display like that?
I think 4th of July is fun and I am glad that I live in a nation where I can freely worship God but sometimes all this Christian hype baffles me.